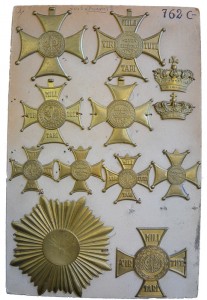 Origins of the Virtuti Militari cross reach to the late XVIII century. In 1972 Polish king Stanisaw August establish new order, the highest decoration for military virtues, as it was said directly by the order name. First decorations were made in the form of oval medal on a ribbon, worn under the neck. Later decoration was turned into the form of cross. After the collapse of first Polish Republic the order was renewed in times of Grand Duchy of Warsaw, November Uprising and in 1921 as a highest military decoration of second Polish Republic. Since this time decoration has a form of a maltan cross with eagle in the center medallion and VIRTUTI MILITARI devise on the arms. It is divided in to five classes that differ in their look and shape. Two highest classes have separate stars worn on a left part of the uniform.

Since 1921 crosses of different classes were produced by number of manufacturers in Poland and some other foreign countries. Most common foreign productions came from France. Traditionally France was the country were fled many Polish officers oppressed by Russian occupant for their participation in Napoleon’s campaigns and November Uprising in years 1830-1831. Many of them ordered beautiful Virtuti Military crosses in French jewelry manufactures. Reputation gained in XIX century lasted and was confirmed by new producers. Later, during World War II number of decorations were produced in United Kingdom. They were made on demand of Polish government on exile and for private demands. Most popular were crosses made by Spind and Son.

Still there is very little known about this foreign productions. Till 1989 Poland was cut of from possibilities of free research in western archives due to restrictions put by communistic government. Therefore knowledge about foreign productions of Virtuti Militari crosses is based rather on empirical observations, than on documents. History is being brought from mouth to mouth and not always represents the highest level of accuracy. One of those inaccurate stories is about so called ‘Italian Virtuti Militari’.

It is not so common knowledge, but still easy to obtain that those crosses were produced by Picchiani and Barlacchi in Florence. This was a reputable company established in 1896 by Gastone Picchiani. In 1915 Bruno Barlacchi joined the company and it’s working until this day in the same town. During World War II they produced number of badges for II Corp of Polish Army in Italy. This led some collectors to conclusion that Virtuti Militari of this production had to be made on demand of Polish officials some time at the end of the war. 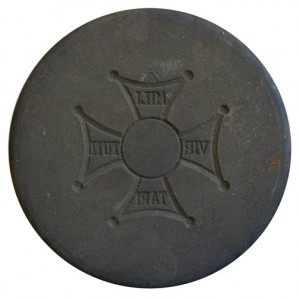 This would be very attractive from the collectors point of view. Still there are few signs that make this nice story doubtful. First of all, there is not even one P&B cross with confirmed attribution to an awarded person from this time. On the other hand there are attributed crosses from this time, made by Spink and Son. Secondly the picture of the cross is very modern for a middle of the 40’ties. Third, all the preserved crosses are at least in a very good condition.

To solve the puzzle I put my first steps to P&B factory in Florence, where I met with company archivist Chiara Montauti. She showed me a plaque with sample prints for Virtuti Militari cross and some of the preserved stamps. Unfortunately she couldn’t help me more because company lost most of the documentation. I tried to find company documentation in City Archive of Florence (Archivio storico del Comune di Firenze). Due to Italian law each company is obliged to donate their documentation to public archives after some time. Unfortunately files of particular companies that were held in this archive were destroyed during the flood of the city in 1966. By this point I doubted if I will get any information.

Fortunately I met Massimo Peruzzini, a distinctive Florence dealer with medals and decorations. Several years ago he bought from Picchiani and Barlacchi number of cases presenting Virtuti Militari crosses in all classes. Each cross had a small paper with information about the size and weight of the cross. He couldn’t tell me more, but was kind enough to ask one of his older clients, who is an reputable badges collector in Florence. He said that due to his information crosses produced by Picchiani and Barlacchi were made on the order of Polish government on exile, but not in the 40’ties. By his knowledge in the beginning of 60’ies Polish government on exile found decorations produced by Spink and Son too expensive and was looking for a cheaper supplier. They thought about Picchiani and Barlacchi as a former supplier of Polish army. By his memory the crosses occurred some time between 1960-1965. 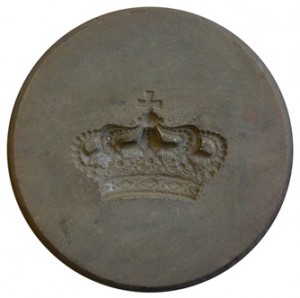 Polish government didn’t buy all the production and some crosses were left at Picchiani and Barlacchi. In 90’ies factory had some major financial problems due to already made, but unpaid big order. At this time they decided to sell all inventory left on stock. In this number there were also sets bought by Massimo Peruzzini. It is a question if the crosses known on the collectors market in years prior to Picchiani and Barlacchi financial problems came out of the factory or from the Polish government on exile? They are surely known on Polish market since late 60’ties. One is sure, despite many questions from collectors, Chiara Montauti says that there will be no restrike of the cross in the future. Unless she is in the company, she adds…

This site uses Akismet to reduce spam. Learn how your comment data is processed.